Nails are one of the most common fixings used in most do-it-yourselves households everyone using them from the hobbyist to the professional builder, most users not thinking of the history of the nail or the nail's influence on the development of other fasteners and fixings.

Bronze nails found in Egypt, have been dated to a time 5400 years ago, 3400 years before the birth of Christ; a very long time ago. Nail history in Greece in 1000BC shows nails being included in grave items and famously the Romans who 2000 years ago used nails in crucifixion including the infamous crucifixion of Christ. The use of nails in boat building just over 2000 years old, later led to the development of the rivet in shipbuilding. 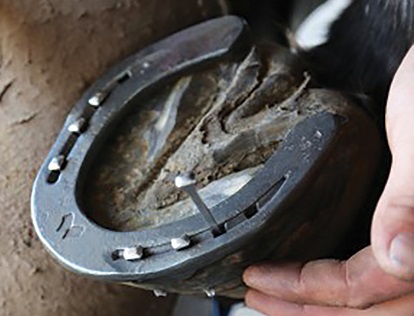 Around 1300 years ago the word ‘Nail’ came into regular use at the same time Smiths started to use metal nails to attached metal horseshoes to the horses own keratin nails; before then horses wore sandals or leather strap on shoes that had a short wear life.

Nails in the 19th Century

Until the last decade of the 1700s and the early 1800s, hand-wrought nails fastened the sheathing and roof boards on building frames. These nails were made one by one by a blacksmith or nailer from a square iron rod. After heating the rod in a forge, the nailer would hammer all four sides of the softened end to form a point; the pointed nail rod was then reheated and cut off. The nail maker would then insert the hot nail into a hole in a nail header or anvil and form a nail head with several blows of the hammer. Nails provide one of the best clues to the age of historic buildings, especially those constructed during the nineteenth century when nail-making technology advanced rapidly. 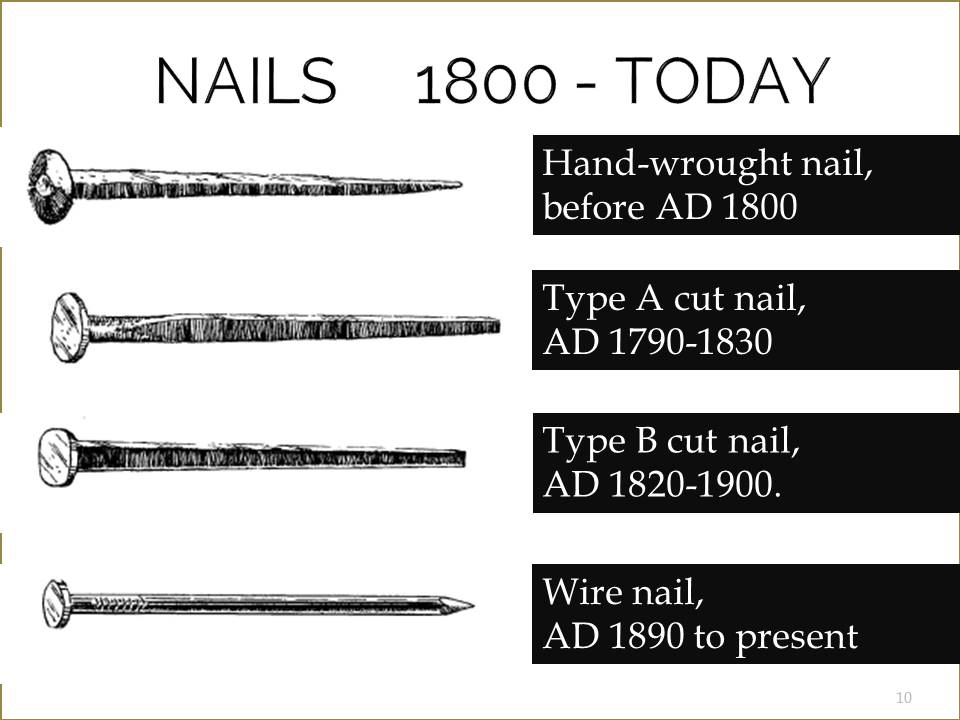 Between the 1790s and the early 1800s, various machines were invented for making nails from iron bars. The earliest machines chopped nails off the iron bar like a guillotine, wiggling the bar from side to side with every stroke to produce a tapered shank. These are known as type A cut nails. At first, the heads were made by hand, but soon machines were developed to beat a head on the end of the bar. This type of nail was made until the 1830s.

By the 1820s, a practical design for a nail making machine was developed: it flipped the iron bar over after each stroke. With the cutter set at an angle, every nail was chopped to a taper. Nails made by this method are known as type B nails.

Nail manufacture by cutting the nails leaves a small burr along the edge as the metal is torn apart. Examining the nail sides for evidence of these burrs, it is possible to distinguish between the earlier type A nails and the later type B nails. Type A nails have burrs on the diagonally opposite edges, while the type B nails have both burrs on the same side. This kind of evidence can be used to establish the approximate period of construction or alteration of a building during a period of population and building growth.

Before American independence, England was the largest manufacturer of nails in the world. Nails were virtually impossible to obtain in what were the old North  American Colonies; it was quite common for American families to have a small nail manufacturing setup in their homes by the fireplace. During severe weather and at night, entire families made nails not only for their use but also for barter. This was not a practice restricted to the lower classes, Thomas Jefferson was quite proud of his handmade nails. In a letter, he wrote, “In our private pursuits, it is a great advantage that every honest employment is deemed honourable. I am myself a nail maker.” From the president to the homesteader, nail making was an essential part of life. Jefferson was among the first to purchase the newly invented nail-cutting machine in 1796 and mass-produced nails for sale. Type B cut nails continued to be the most common nail throughout the nineteenth century a significant development time.

With the rapid development in the 1880s of the Bessemer process, converting iron to cheap steel; the popularity of using soft iron for nail making quickly diminished. By 1886, 10% of the nails produced in the United States of America were made of steel wire. Within six years, more steel wire nails were being produced than iron cut nails. By 1913, 90% of nails were steel wire nails.