British nut and bolt manufacturer F. W. Cotterill was founded around 1810 and was listed as a toolmaker in Darlaston. By 1850 they were making nuts and bolts and by 1880 the business had become a private limited company. In 1912 the company purchased the forging works of John Garrington and Sons and in August 1919 the whole concern was taken over by Guest, Keen and Nettlefolds; G.K.N.

Arthur Keen's Patent Nut and Bolt Company originated from the firm Watkins and Keen, based in Smethwick from 1856. They marketed a patent machine to make nuts and in 1864 were launched as a limited company, specialising in fasteners.

Guest, Keen and Co. were incorporated on the 9th July 1900, following the merger of Dowlais Iron Co with Arthur Keens Patent Nut and Bolt company.

In 1823 Nettlefolds was established trading in wood screws, in 1854 the company founded a mill in Smethwick. In the 1850s John Sutton Nettlefold saw a machine for the automated manufacture of wood screws, he bought the rights to the patent, giving him the opportunity to dominate the domestic wood screw market. launched as a limited company. Through a series of amalgamations and takeovers, including the takeover of the Birmingham Screw Company Limited in 1880 Nettlefolds established a monopoly in the British wood screw market. 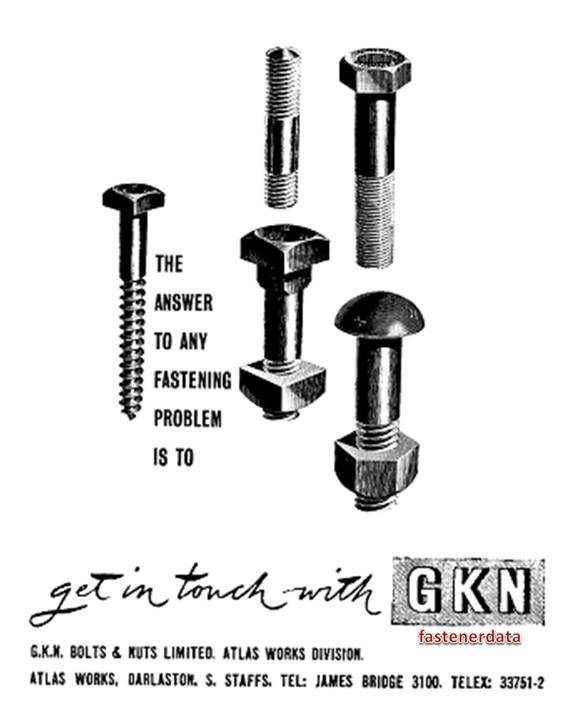 Following the acquisition of Nettlefolds in 1902 Guest Keen and Co changed its name to Guest, Keen and Nettlefolds Ltd  GKN. As a result of the acquisition, GKN became one of the world's largest manufacturing businesses that including nuts, bolts, screws and fasteners for which it was then famous.

The pre-war years were not good for G.K.N. who continued to record losses in their nut and bolt factories, as a result, a policy to eliminate surplus capacity through the bankruptcy of weaker sections of the business took place. In May 1939 a modernisation scheme was introduced buying four American-made National bolt making machines.

During World War two great demands were put on the factory. In November 1942 the Ministry of Supply asked the works to double its output of cold forged nuts and bolts, which resulted in double-shifting; by the end of the war Atlas Works Darlaston covered an area of over 20 acres and employed about 3,000 people. 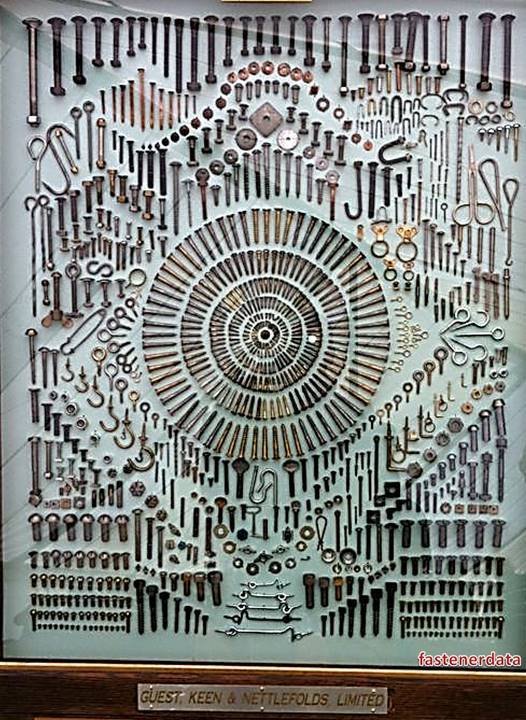 Guest Keen and Nettlefolds expanded through the acquisition of many companies by 1948 its divisions were the Bolt & Nut Division in Darlaston and the Screw Division in Smethwick, Birmingham. In the late 1960s the Heath Street Works, Smethwick had grown to a 50-acre complex employing 4,500 people.

GKN's price lists were used by fastener distributors throughout the UK, discounts were controlled ensuring a profit for all. The advent of fastener product from Europe in the 1970s destroyed this price stability, creating a competitive and aggressive marketplace.

In 1966 Guest Keen and Nettlefolds entered a programme of diversification and as a result, by the 1980s GKN had disposed of its fastener divisions. The remnants of the fastener divisions struggled; damaged by the 1970’s recessions and under the pressure of cheaper Italian, Spanish and Japanese fastener imports; one by one they ceased trading or were absorbed into other companies.

In 1982 Atlas Bolt the last of the GKN manufacturing plants was acquired by Armstrong and incorporated with its other fastener acquisitions of GSF and Charles Richards, becoming Armstrong Fastenings Ltd. Caparo acquired Armstrong in 1989; following Caparo global financial problems in 2015, the receivers closed the Caparo fastener division and sold the fastener manufacturing machinery.