Charles Richards was born in Wednesbury in 1838, after serving an apprenticeship with a local firm of nut and bolt makers he later started his own business. In 1870 he joined forces with William Butler and started making nuts and bolts at Lion Works in Foster Street. They employed around 40 people, mainly in the production of carriage nuts and bolts, which were supplied to railway carriage companies and the leading manufacturers of horse-drawn vehicles; by 1881 the company employed 130 people. 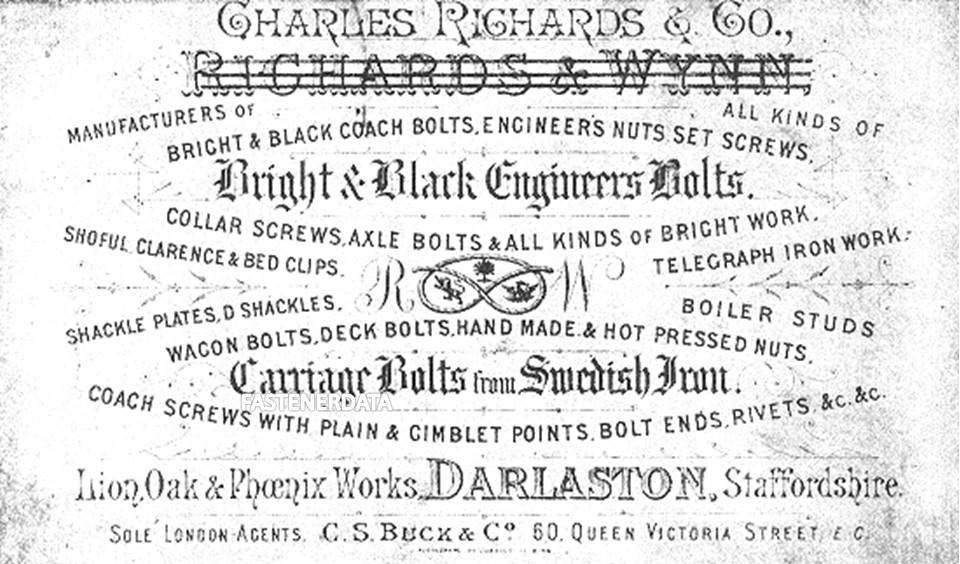 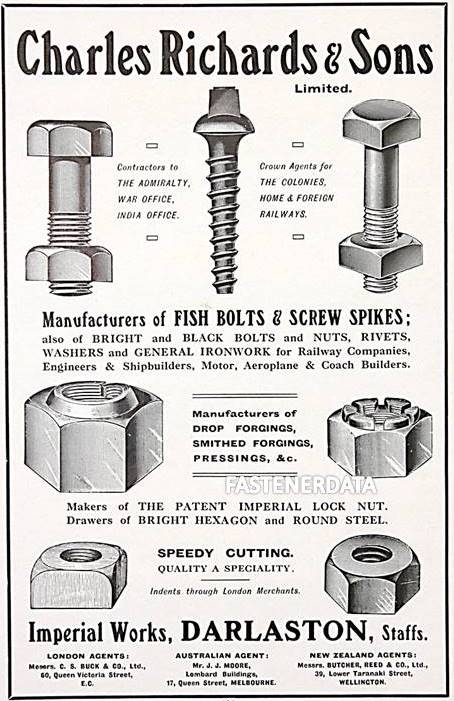 The bolts and nuts were originally forged with the treadle foot-operated hammer ‘Oliver’, invented in the middle ages, and adapted for bolt and nut making in the early nineteenth century. The larger nuts and bolts were first forged under a steam hammer, before being taken to the Oliver operators to be hand dressed.

Due to a huge demand for the company’s products, Oak Works and Phoenix Works were purchased and by 1881 the company employed 130 people. Within a few years, Mr Wynn retired and four of Charles Richards' sons joined the company making it very much a family concern. They were Silas and Arthur who became responsible for the management of the works, Charles, who looked after the commercial side, and Samuel, who looked after outside sales. They worked hard, and the business prospered, soon outgrowing the three factories. 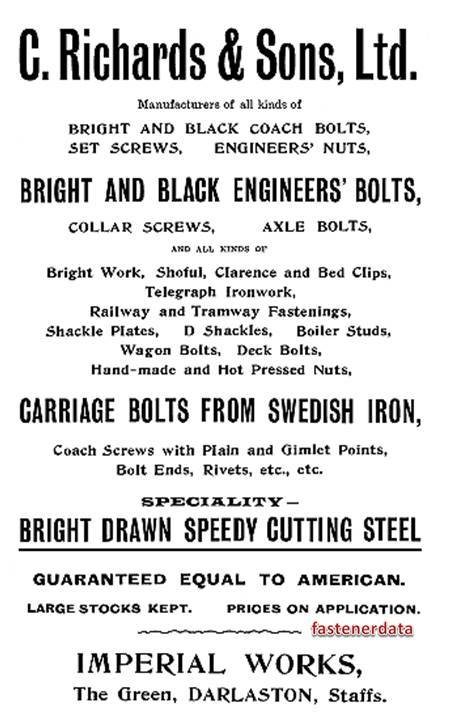 Charles Richards and Co advised the market that they produced fasteners using only the best materials in steel and iron including the finest brands of Swedish iron.

Charles Richards were drawing their own bright bar and buying thousands of tons of black bars from America, the world’s only supplier. 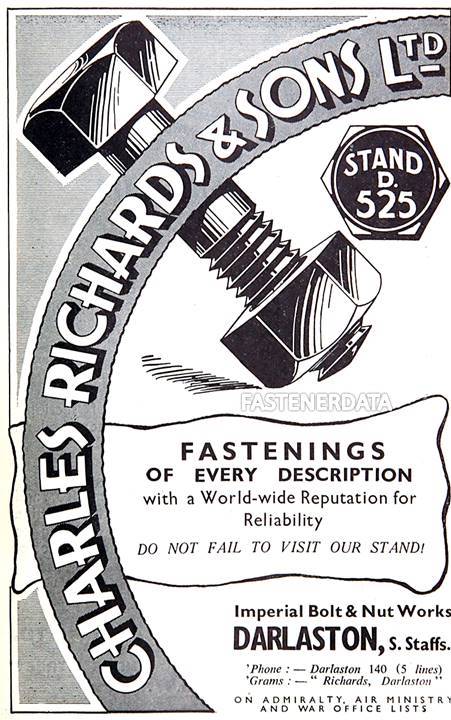 Machine technology continued to improve, and new machines were acquired to increase production, including National bolt maker cold heading machines, and automatic screwing and pointing machines and Nut cold formers. A new heat treatment plant was installed using the latest type of electric furnaces for hardening and tempering, and the facilities in the test house and laboratory were improved.

Screw spikes had long been a successful product; in 1932 the company received an order from China for five hundred tons of screw spikes. 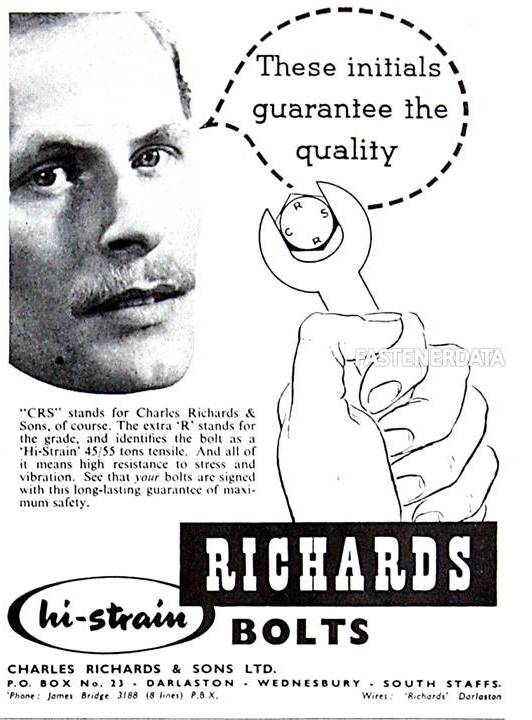 The company kept an eye on potential global markets and produced fastenings to suit. By the late 1950s, the oil industry had greatly expanded, and so specialised fastenings were produced, which were used throughout the industry.

In the 1960s the main products were black, bright, and high tensile bolts and nuts, high strength torque bolts for use in the construction industry, and repetition parts including fish-bolts, screw spikes, rail clips and parts for rail track and telegraph ironwork. 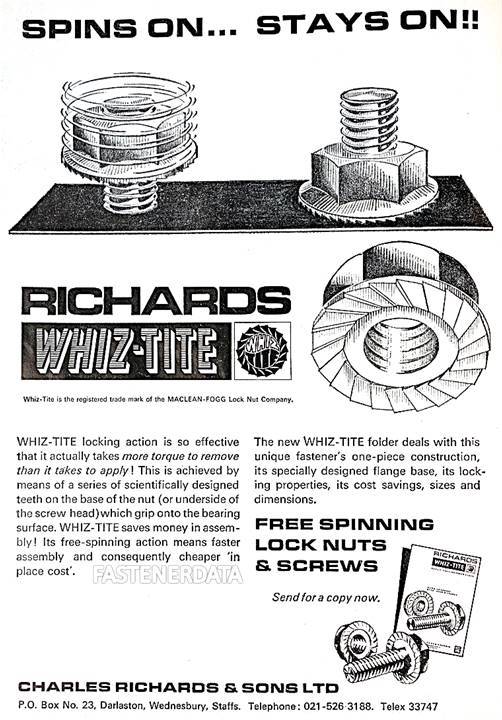 The future looked bright until the beginning of the 1980s; recessions and imported cheaper fasteners forced Charles Richards' son Peter together with John Richards Grant to sell the business to a South African company in June 1980.

Following the takeover and factory closure, the order book and assets were sold to Armstrong Equipment Ltd. The new company Armstrong fasteners had already acquired GSF and later acquired GKN Atlas bolt in 1982. 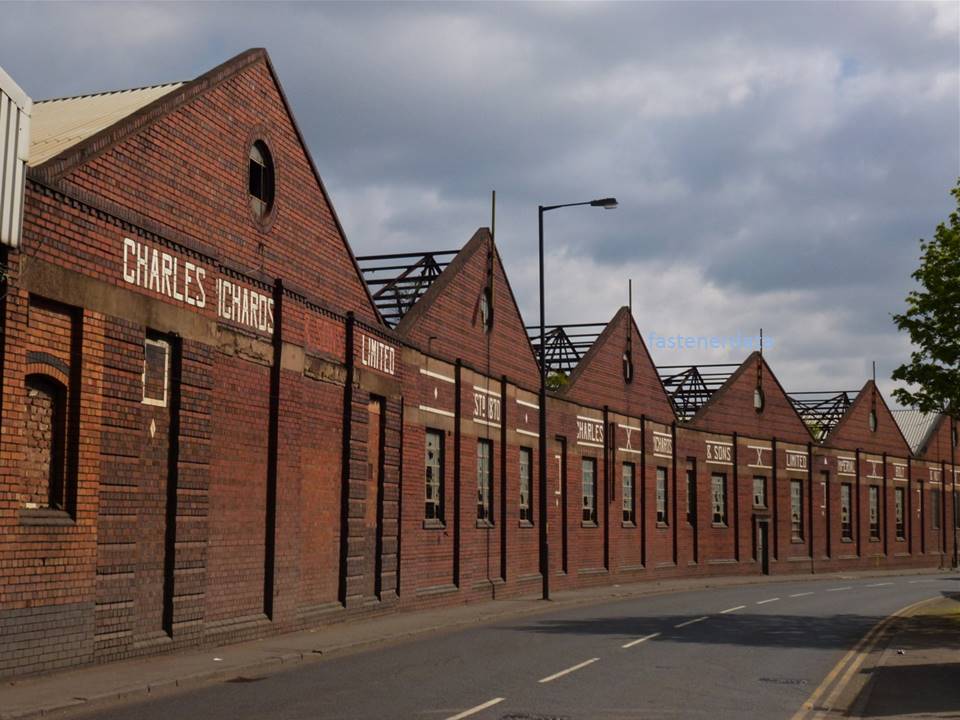