Fasteners of the Tapered and Self Threading Screw Family

Fasteners that are defined as ‘screws’ is a term that not only applies to parallel thread machine screws and fully threaded bolts but also to a range of fasteners with tapered shanks.

These fasteners are not screwed into threaded holes they are rotated (screwed) and form their thread in the component material being fastened or fixed, prohibiting the use of a nut. This family of screws includes wood screws for wood, self-tapping screws and self-drilling screws for metal and drywall screws for plaster. The majority of screws use an internal drive fitting in the screw head; some use an external hexagon wrench. Tapered screws are on average smaller than parallel threaded screws and cannot usually apply the same amount of torque.

Self-tapping screws ‘tapping screws’ are made from case hardened steel to enable tapping into sheet steel plate, a pilot hole is required to ensure the plate is formed to make a close fitting mating thread.

Standard self-tapping screws are identified by their head, drive type with a letter code denoting the thread type and point.

Popular Self tapping screws are available with an assortment of head designs, the most common are Pan and Countersunk head. Self-tapping screw drives are internal, predominantly Phillips drive globally, with Pozi in the UK, Square drive in Canada and of course the historical slotted drive.

Wood screws are a metal screw used to clamp items onto wood, chipboard, MDF and other pulp-based materials, tapping a mating thread generally into a pilot hole as they are installed. A wood screw generally has a partially unthreaded shank below the head, the unthreaded portion of the shank is designed to slide through the top board, closest to the screw head, so that it can be pulled tight to the board to which it is being attached. Wood screws have an internal drive, traditionally a slot but far more commonly a Pozi® or Phillips® drive; in Canada square drive recess is also available, preferred by some users when manually driving screws for its secure fit to the drive bit. Wood screw threads are tapered to a Gimlet sharp point; screw development has allowed the introduction of points that reduce the potential for splitting the wood and allow assembly without a pilot hole. Traditional wood screws with a conical point represent a small element of the market and are used in historic furniture applications.

Twin Thread woodscrews were developed for faster installation in wood and chipboard. Screws with a twin or double start thread have two threads running along the body of the screw instead of just one. Screws with twin-start threads often have a larger pitch, which means they can be inserted or removed twice as fast and will also hold material more securely.

Drywall screws are designed to fix plasterboard to timber or thin metal in partition walls. To meet the demands of the American market, they have a Phillips cross recess drive. Drywall screws bugle head ensure a flush countersink into the board without paper tearing. Fine threads assist fixing to metal studs and coarse threads for fixing to timber. The very sharp point is designed to pierce 1mm metal and ensures immediate and wobble free penetration of the board. For maximum productivity, drywall screws are available in the collated condition for use with specialist power drivers. Self-drilling fine thread drywall screws have a drill tip to penetrate heavier gauge metal.

Chipboard screws have a single thread and a thin shank that provides better resistance to pull-out in particle board but has a lower shear strength. The threads on particle board screws lack height symmetry. Chipboard screws are preferred for their greater efficiency, and have gained popularity because of the wide use of battery operated drivers and the requirement to insert screws without first drilling a pilot hole. There are now a wide variety of designs that include additional performance features to improve drive speed, countersinking and to minimise splitting of the chipboard.

Decking screws are similar to drywall screws except that they have improved corrosion resistance and are generally supplied in a larger gauge. Most deck screws have a type-17 auger type thread cutting tip for installation into decking materials. They have bugle heads or cutting countersinks that allow the screw to depress or cut into the surface without splitting the wood.

Coach screws or lag bolts as they are called in the USA are similar to a wood screw except that they are much larger and have a hexagon drive, they originally had square drives. Lag bolts are designed for securely fastening heavy timber beams and posts along with timber railway trestles and bridges. 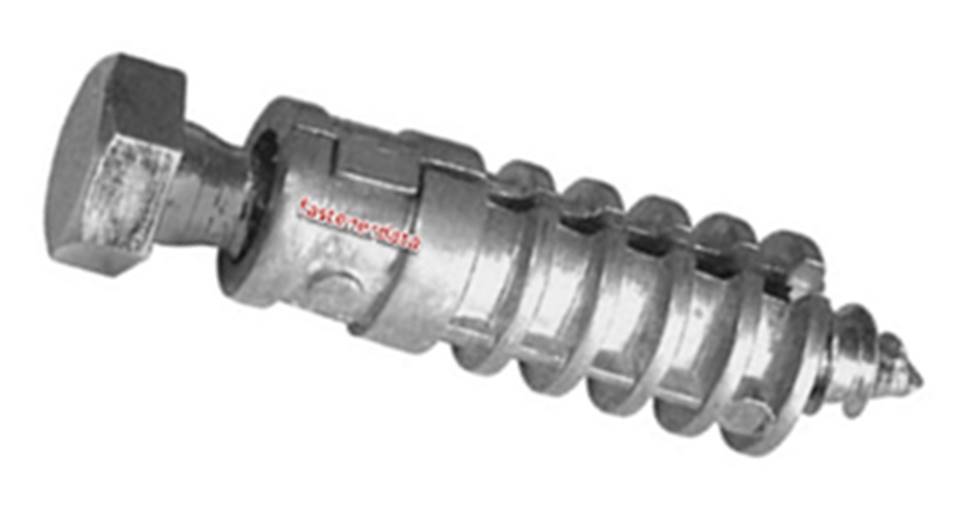 Lag bolts in the USA were traditionally used with an expanding insert called a lag when screwing timber to masonry or concrete walls. The lag insert has a hard metal jacket that bites into the sides of the drilled hole, and the inner metal in the lag being a softer alloy of lead, or zinc alloyed soft iron. The coarse tapered cutting thread of a lag bolt and the lag insert mesh and deform slightly making a secure mechanically strong fastening.

Head styles include countersunk, pan but the dominant drive is a hexagon that has been designed for steel building cladding and is known as a Tek screw. Tek screws have a captive neoprene/steel bonded washer that produces a weatherproof seal. Stainless steel Tek screws have an alloy steel drill tip induction welded to the stainless steel shank and are known as bimetal screws.

Thread-forming screws are assembled into a plain pilot hole forming the internal thread by cold swaging. This eliminates the need for thread tapping provides a significant assembly cost reduction. The strength of a swage thread is greater than a cut thread because the grain flow of the steel is maintained. 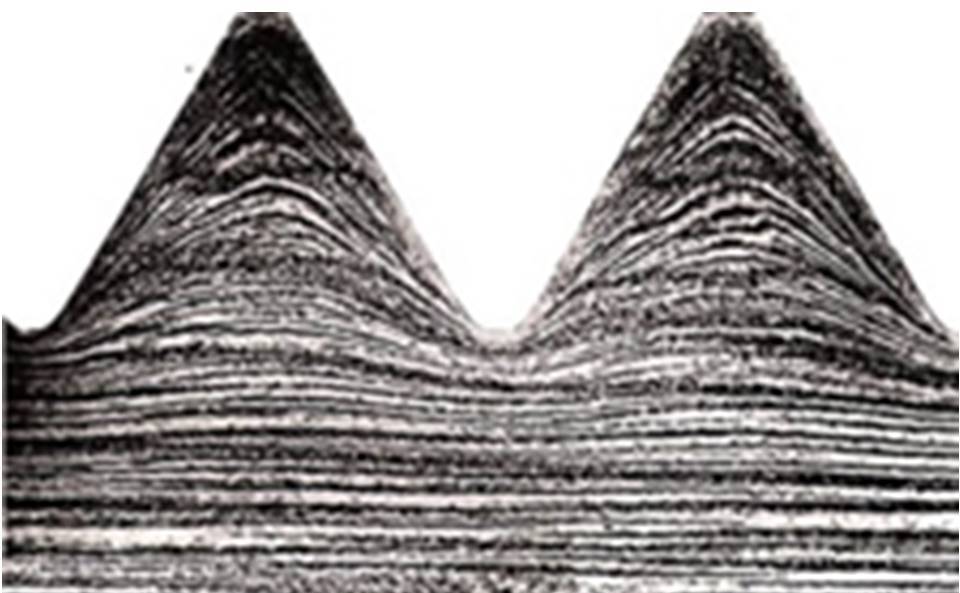 Many thread-forming fasteners have a ‘trilobular’ thread point; this provides space for material movement as the thread is roll formed into a plain, pre-prepared hole, the size of the hole is important to ensure the correct amount of material is available to form the internal thread. Most thread-forming screws generate standard metric or American unified threads; this allows a standard bolt or screw to be replaced if the original thread-forming screw is removed. 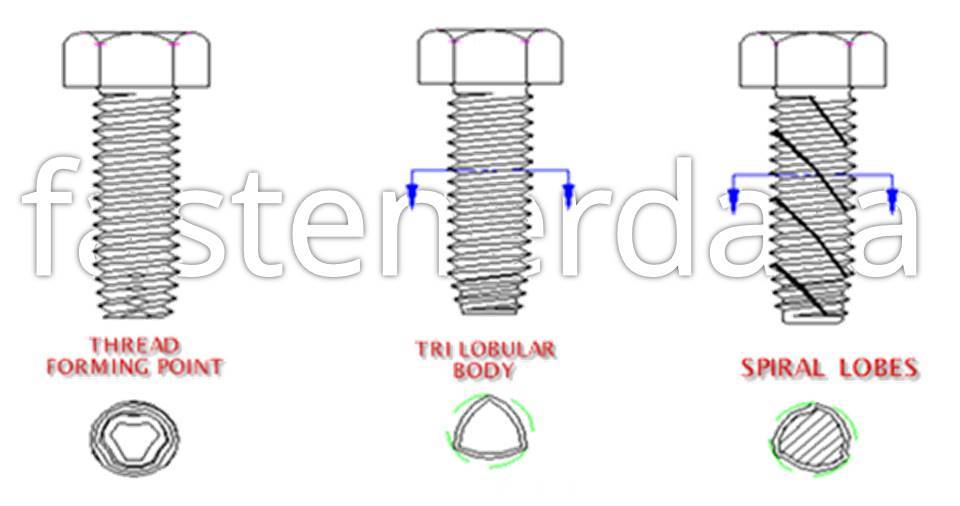 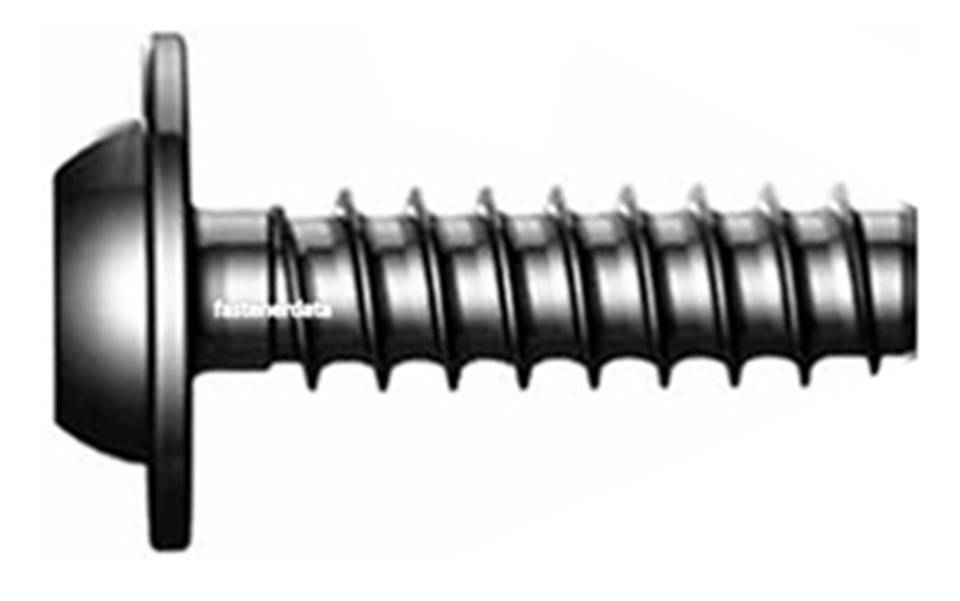 Screws to thread form in plastic materials are readily available, primarily from branded suppliers. Thread spacing is wider and may vary depending upon the type of plastic involved and allows plastic deformation to aid thread generation by shaping without removal of any material.

Thread cutting screws are assembled into a plain pilot hole and act as a thread tap, cutting the thread into the hole. This eliminates the need for prior thread tapping provides a meaningful assembly cost reduction.

Thread cutting fasteners have clearance flutes to allow space for cut material movement as the thread is cut into a plain, pre-prepared hole, the size of the hole is important to ensure the correct amount of material is available to produce the internal thread. Thread cutting screws generate standard metric or American unified threads; this allows a standard bolt or screw to be replaced if the original thread cutting screw is removed.