Fastener manufacturing by forging and rolling is the modern way off manufacturing with multi station bolt formers & part formers along with High Speed Flat Die and Circular Die Thread Rolling Machines allowing the production of all types of threads. A description of the methods and alternative ways of producing fasteners are detailed here.

Links or scroll the page 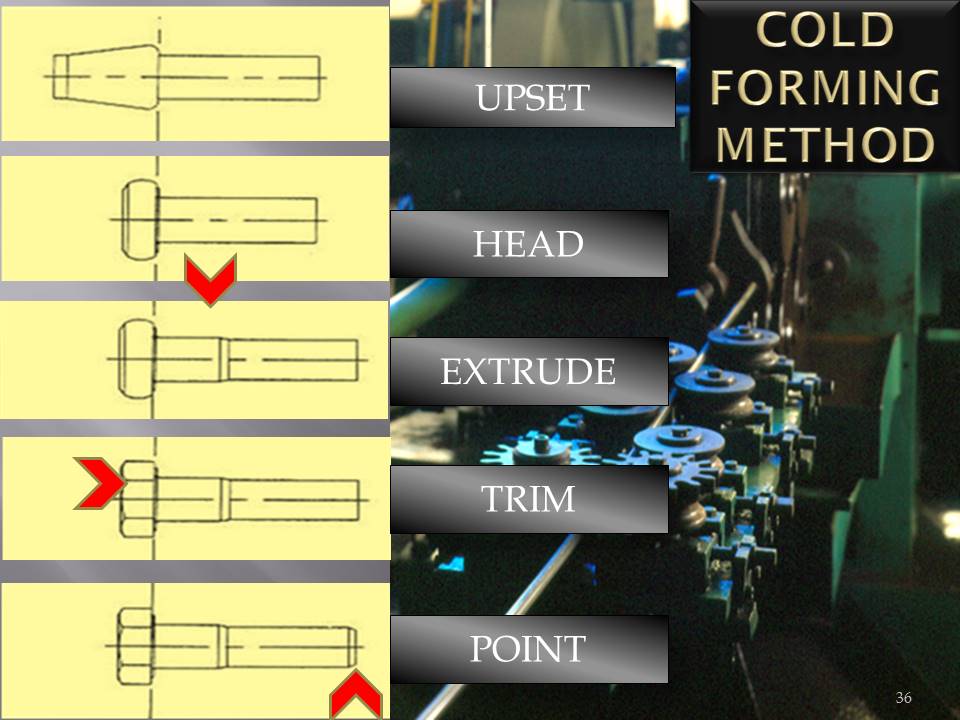 The most popular method of producing fasteners, cold heading, cold forging or cold forming are basically putting material in a die and hammering it. Unlike hot forging, where the metal is heated before forming, or casting, where the metal is melted and solidified, cold heading and other methods of cold forming cause the metal to deform at room temperature. Surface finishes can rival those achieved with machining, depending on the precision of the tooling. Cold forming can produce fasteners using the minimum of material, to close tolerances, and at the rate of dozens or hundreds per minute. In addition, cold-formed parts exhibit excellent strength, as the material grain flows into its final form, rather than being cut, as in a machined fastener.

All these benefits are not cheap, tooling costs for cold forming can be significant. Lead time for design and setup to run cold-formed parts is often measured in weeks, much longer than it would take to program and set up the same part on a CNC lathe. For small quantities, cold forming may not be cost effective and this is where machined or hot forging methods come into their own.

A machined fastener starts out with a chunk of material large enough to contain the desired part. Then you cut away everything that isn’t the part. This produces chips, which are wasted material. Cutting can also disturb the grain structure of the metal.

Today’s cold-forming technology has come a long way from the simple cold-heading process used in the fastener industry for over a hundred years. While cold forming is still “taking a piece of metal and hammering it,” the process can now produce complex, precision fasteners economically in large quantities, producing  fasteners up to M36, double the size limitation of the 1990’s.

The entire process is performed on a “bolt maker” machine. 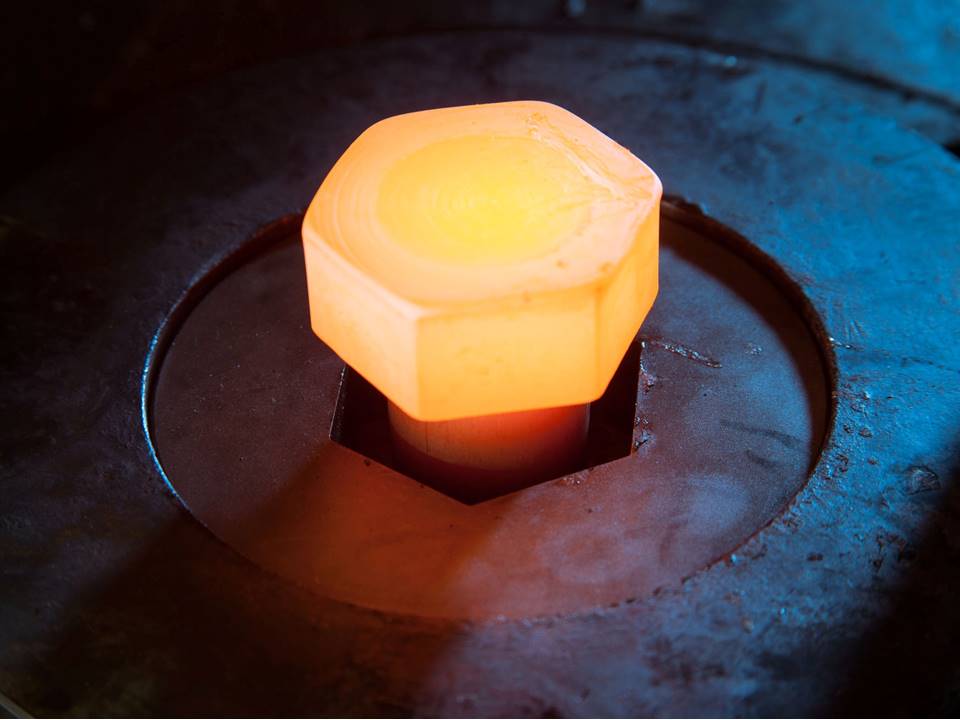 The use of heat to soften the metal to make it easier to shape is called forging and takes its name from the black smiths forge. This is the original method of producing fasteners and bolts; hot metals were beaten into shape with a hammer.

The idea of mass producing hot forged fasteners primarly bolts was originated with Micah Rugg, a town blacksmith. In 1818 in Connecticut USA, he invented a machine for making carriage bolts. Up to 1839  Rugg's made around 3,000 hot forged bolts, during 1839 he devoted his whole attention to bolts and nuts and in 1840, he took a partner Martin Barnes, constituting the firm of Rugg & Barnes.   In the first year they produced over 100,000 hot forged bolts.

The big change is that the hammer is now a mechanical device and the forge has been replaced by an induction heater, The metal is pressed in to a high strength part known as a forging, the forging is much stronger than an equivalent cast or machined part; it is for this reason that forgings are used where reliability and safety is critical. When the piece of metal is being shaped into a bolt or socket form, its initial integral grain is deformed to fit the new shape, the result is the grain is continuous throughout the fastener, producing a piece with improved strength characteristics.

With the age of the CNC machine, bar turned fasteners have moved from the 19th and into the 21st century.

CNC machines are capable of rapidly producing intricate turned parts by a mixure of Turning, Milling and Grinding.

Additional operations performed on fasteners are a regular feature in the fastener market place. There are a limited number of companies that have the facilities or skills to carry out this work. Drilling requires the accuracy and the ability to drill through high tensile steel, to hold the thread with out damaging it and to remove the bur after drilling. Cutting both unthreaded, threaded rods and rebar and the ability to thread rebar are both skilful activities performed on long lengths of product.