This finish has a number of names Blackodize, Chemical Black and Gun Barrel Blue. Black oxide is a coating for fasteners; It is used to add mild corrosion resistance, for appearance and to minimize light reflection. To achieve maximum corrosion resistance, the black oxide must be impregnated with oil or wax. One of its advantages over other coatings is its minimal deposit. 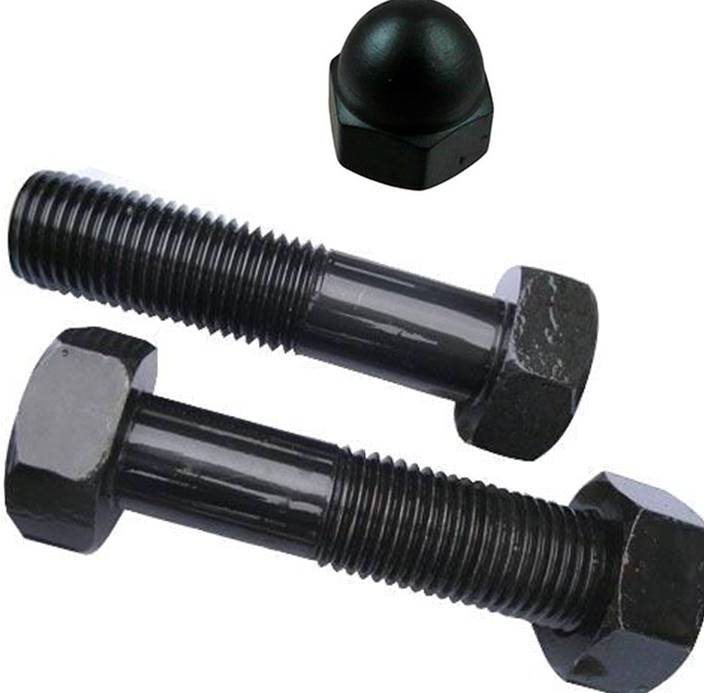 A hot bath of Sodium Hydroxide, nitrates and nitrites at  141°C are used to convert the surface of the material into magnetite (Fe3O4). Water must be periodically added to the bath, with proper controls to prevent a steam explosion. Hot blackening involves dipping the fastener into various tanks. These tanks contain, in order, alkaline cleaner, water, caustic soda at 140.5°C (the blackening compound), and finally the sealant, which is usually oil.

The caustic soda bonds chemically to the surface of the metal, creating a porous base layer on the Fastener. Oil is then applied to the heated part, which seals it by "sinking" into the applied porous layer. It is the oil that prevents the corrosion of the Fastener.

There are many advantages of blackening, mainly: blackening can be done in large batches, ideal for small fasteners No significant dimensional impact, the blacking process creates a layer about a micrometre thick. It is cheaper than similar corrosion protection systems, such as electroplating.

Historically Bluing or gun barrel blue is a passivation process where steel is partially protected against corrosion primarily iron oxide (rust) it is named after the dark-blue-black appearance of the protective conversion finish. True gun bluing is an electrochemical conversion coating resulting from an oxidizing chemical reaction with iron on the surface selectively forming magnetite, Fe3O4, the black oxide or blackodize as it is sometimes called. Black oxide provides minimal protection against corrosion unless it is also treated with oil to displace water and reduce wetting and galvanic action. Traditional bluing is similar to more modern black oxide coatings, bluing being a subset of black oxide coating.