The differences between the two socket cap screw standards are in head height and key engagement. Socket screws were developed for applications with limited space and have cylindrical heads and internal wrenching features that allow them to be used in locations where externally wrenched fasteners are not desirable.

Their original configuration adopted in 1936 didn't maintain consistent dimensional relationships between the nominal shank diameter, head diameter, and socket size throughout the size range; this limited the performance potential of some sizes.

Eventually, these new dimensions were accepted as industry standards, in the UK in 1960 and later adopted into the American ANSI standards.

In contradiction the UK market buys more 1936 than 1960 Socket capscrew although the USA and Canadian markets are predominantly 1960 series; both markets stock both series.

Product to both standards is extensively stocked in the USA, UK, and the historical colonies of India and Australia.

There are a large number of sizes that are exactly the same in both 1936 and 1960 standards, please click on the below chart to see the differences and common sizes. 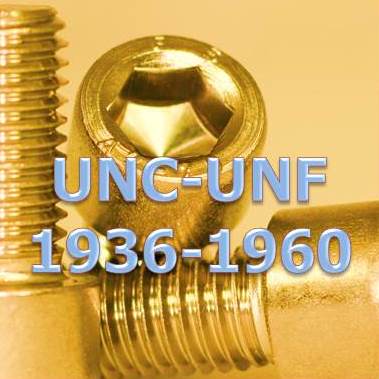 The idea of a hex socket screw drive was probably conceived as early as the 1860s through 1890s, but that such screws were not manufactured until around 1910.  which are confirmed to include internal-wrenching square and triangle drives. Mr Peter L Robertson a Canadian, first commercialized the square socket with a taper in 1908, having perfected and patented a cold forming manufacturing method for light low strength screws.

Mr William G. Allen patented a method of cold-forming screw heads around a hexagonal die in 1909  Published advertisements for the "Allen safety set screw" by the Allen Manufacturing Company of Hartford, Connecticut, exist from 1910. Although it is unlikely that Allen was the first person to think of a hexagon socket drive, his patent for a manufacturing method and his realized product appear to be the first. 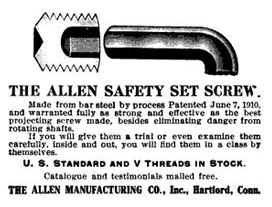 The founder of the Standard Pressed Steel Company 'SPS', Howard T. Hallowell Sr, has a version of the event in which SPS developed a hexagon socket drive in-house, independently of Allen, around 1911, from this, came the Unbrako line of products. Howard Hallowell does not mention the Allen patent of 1910, nor the Allen safety set screw product line. Hallowell does describe the same inspiration also mentioned in connection with Allen for a wave of adoption of the hexagon socket head, beginning with set screws and followed by cap screws. This was an industrial safety campaign, part of the larger Progressive Movement, to get headless set screws onto the pulleys and shafts of the line shafting that was operational in factories at that time. The headless set screws would be less likely to catch the clothing of workers and pull them into contact with the turning shaft, a selling point.

SPS at the time was a prominent maker of shaft hangers and collars, the collars set in place with slotted set screws. In pursuit of headless set screws with a better drive than a straight slot, Hallowell said, SPS had sourced set screws with a square-socket drive from England, but they were very expensive. (This was only 2 years after Robertson's Canadian patent.) This cost problem drove SPS to purchase its first screw machine and make its screws in-house, which soon led to SPS's entry into fastener production and sales. Hallowell said that while we experimented with a screw containing a square hole like the English screw but soon found these would not be acceptable in the USA. Hallowell decided to incorporate a hexagon socket into the screw  Hallowell does not elaborate on why SPS found that the square hole "would not be acceptable in the USA", but it seems likely that it would have to have involved licensing Robertson's patent, which would have defeated SPS's purpose of driving down its cost for internal-wrenching screws . The story of whether SPS's methods required licensing of Allen's 1910 patent is not addressed by Hallowell's memoir. The book does not mention which method; cold forming or linear broaching was used by SPS in these earliest years. If broaching was used, then Allen's patent would not have been relevant.

Hallowell said that acceptance of the internal-wrenching hexagon drive was slow at first, but that it eventually caught on quite strongly. This adoption occurred first in tool and die work and later in other manufacturing fields such as defence, aircraft, tanks, submarines, civilian aircraft, automobiles, bicycles, and furniture.

Concerning the dissemination of the screws and wrenches, Hallowell said that "the transition from a square head set screw to a hexagon socket head hollow set screw[ for which had to be developed special keys or wrenches for tightening or loosening the screw, was the cause of more profanity among the mechanics and machine manufacturers than any other single event that happened. I am sure that the old-timers who read this book will remember this period vividly. These transitional growing pains echo those experienced many decades later with the adoption of the Torx drive.

World War II, with its unprecedented push for industrial production of every kind, is probably the event that first put most laypersons in contact with the internal-wrenching hexagon drive. Popular Science magazine would note in 1946 that "Cap screws and setscrews with heads recessed to take hexagonal-bar wrenches are coming into increasing use."

The internal-wrenching hexagon drive may have been independently reinvented,  the design or methods of manufacturing was patented in various countries by various patentees, and only its name varies. For example, in various European countries, it is known by the name Inbus (often misspelt *Imbus), after the company that patented them in Germany in 1936, Bauer und Schaurte of Neuss, Inbus stands for Innensechskantschraube Bauer und Schaurte. Similarly, there is another name in Italian Brugola, stemming Egidio Brugola, a company who first commercialized Allen's products in Italy in lower grade 8.8 in 1927 and became the largest supplier of cold formed parts to Fiat cars.