A brief History of Clevedon Fasteners Clevedon fasteners are cold forging company, their main product lines are rivets, not pop rivets but solid, semi-tubular, fully tubular and self-piercing rivets. For anyone reading this that is not sure what I am talking about, if you have double glazing at home, then the window hinges holding the windows in place were probably made using our rivets. The multi-point locks on your patio doors probably have our gears in their drive mechanisms and lock adjusters in parts that lock the door to the frame.

This is the History of Clevedon Fasteners Ltd a sunset business which according to conventional wisdom should have passed into history long ago, but as you will see, the business is far from conventional and is alive and thriving.

Clevedon Fasteners Ltd started life as Clevedon Rivets and Tools in 1939; it took its name from the road in which it was established, Clevedon Road, Balsall Heath, Birmingham.

The company was founded by colleagues Bertram (Bert) Godwin and Frederick (Fred) Wood. In those days, all cold heading tooling was made from tool steel. Bert and Fred saw an opportunity as they believed that Carbide would provide tooling with much greater tool life. Having been unable to convince their employers at the time Baxter’s Bolts, Screws and Rivets, they took the plunge and set up Clevedon Rivets and Tools.

No one was particularly interested in this new-fangled material which was much more expensive than the tradition tool steel tooling, but they persisted, sending out tools on a trial basis to other cold forging companies

Fred also recognised early on, that there was a future in non-ferrous rivets and started making Aircraft rivets

Eventually the tooling found its way to a company called Guest, Keen and Nettlefolds, known today as GKN, one of the largest fastener manufacturers in the UK at the time, GKN was amazed at the longevity of the carbide tools they put on test and as everyone in the industry knows, what GKN approved became the tooling of choice for all manufacturers.

The advent of the war in September 1939 proved another step in the development of Clevedon as due to their tooling prowess and knowledge of aluminium alloy rivets, they were awarded the plumb products by the War Ministry when they rationalised the UK manufacturing for the war effort. Clevedon supplied rivets for the manufacture of aircraft for the RAF including Spitfire’s made at Castle Bromwich in Birmingham, currently home to Jaguar Land Rover.

As the business developed, the pair had to move premises, and on one fateful weekend, when the move was due to take place, due to the lack of people to help move on the weekend, they decided to move on Friday, during the day. On the evening the Clevedon Road premises were flattened by the Luftwaffe!

In 1940, the pair were joined by Bert’s brother, Ron Godwin.

Clevedon Rivets and Tools were incorporated in 1943 and remained a private company until 1954 when together with a company called Samuel Smith and Sons, they became a public company.

Clevedon has always been a profitable company and when the venture with Samuel Smith and Son started to fail, an entrepreneur by the name of Dennis Dukes saw an opportunity to add to his growing group Astra Securities.

Wanting to change the personnel in his new venture, Dennis Duke telephoned Richard Wood, Fred’s son and offered him the position of Managing Director. Richard accepted, but his first task in his new role was to get rid of the incumbent Managing Director………His father!

In 1960 a young man by the Name of Ken Hodges joined the business at the tender age of 14. Ken is still employed by Clevedon Fasteners Ltd at the age of 73!

Clevedon Rivets and Tools was run by Richard Wood and a young engineer by the name of John Mathews, son in law of Bert Godwin one of the founders, from 1968 onwards

The business went through many ownership and personnel changes over the intervening years, in 1972 they joined a Company called BTEC and were added to their Fastener group, headed by the improbably named Bifurcated and Tubular Rivet Company in Aylesbury, Buckinghamshire. Known as Biff and Tub, at its height, Biff & Tub manufactured 100,000,000 fasteners per week

During the years Biff and Tub used to manufacture products known as Bifurcated (split rivet) rivets, these were used predominantly in the wooden packaging industry to rivet crates and reels. The advantage of the Bifurcated rivet was that it did not require a hole to set the rivet, instead, the bifurcated rivet was forced into two layers of wood, and the legs of the rivet splayed into the second layer forming a bond 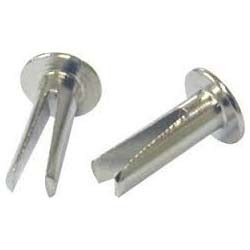 Engineers at Bif &Tub took this idea on stage further and applied it to semi-tubular rivets (SPR). Hence self-piercing rivets came into being

This revolutionary technology, being able to bond layers of dissimilar materials without the need to drill holes, giving a clinch that was stronger than traditional spot welding was seized upon by automotive companies keen to bond lightweight aluminium panels to steel. SPR’s had the advantage that plated panels could be bonded without any degradation to their corrosion resistance.

Various companies made bids for the Fastener interests of Roxspur. Textron (later to become Avdel and subsequently Stanley Black & Decker) were eventually successful in purchasing FastRiv but were not interested in either Clevedon Fasteners or the specialised machinery division of Aylesbury Automation

Textron was unable to make a success of Aylesbury’s Fastener Division and decided to move “Fast-Riv” (the self-piercing product) to Langenhagen in Germany and close the Aylesbury site.

Clevedon made a successful bid for the assets of the ex-Aylesbury Automation Fastener division, and after a complex set of negotiations, the Fastener Division was relocated to Sutton Coldfield along with some ex-Aylesbury employees, over six weeks commencing in May 2001. This move involved over 25 machines, associated tooling and stock. It is a credit to the team involved that customer delivery was unaffected by this move

Textron had significant production problems in Langenhagen and Clevedon supported them, being the source of Fast-Riv for Textron worldwide until the problems were resolved.

Having just purchased the business, albeit as minority stakeholders, the renamed Clevedon Fasteners Ltd was then dealt a near fatal blow by the tragic events of 9/11. British Aerospace a major customer to Clevedon for aircraft rivets, took the turmoil caused by 9/11 as an opportunity to close their regional jetliner (RJ) business in Manchester. By 2nd Qtr. 2002 Clevedon faced the loss of £300k of profitable business on a turnover of £2.4m

Faced with such a business-critical issue, the usual route is to cut costs (usually people costs) and retrench.

Instead, Clevedon signed up to go to their first overseas exhibition, this process was aided through “Passport to Export” a government-sponsored initiative. Brochures were produced in three languages, the web site was upgraded, key members of staff had basic German lessons and support for overseas travel was given. In September 2002 Clevedon exhibited for the first time at Automechanika in Frankfurt.

The response from ex-colonial territories, the Far East and Eastern Europe was astounding. Having been told by the government of all complexions how UK manufacturing was poor in terms of quality and delivery, visitors were astounded to learn that there was still a UK company producing rivets and the orders rolled in. The £300k turnover shortfall was quickly replaced and Clevedon went from exporting to only two countries to twenty-eight and their largest overseas territory became the Far East. In 2002 Clevedon’s exports were £30k they are now (2018) £1.2m

In 2003 the Birmingham Chamber Of Commerce awarded the “Best New Exporter” to Clevedon Fasteners Ltd. As a result of Automechanika and the demand generated.

In 2008 when the banking crisis stopped the commercial world in its tracks. It was clear that Clevedon’s business model needed modifying to ensure greater resilience in the future. Clevtec became a buying and selling arm of Clevedon Fasteners Ltd in 2010. Clevtec was able to buy products not normally associated with fasteners necessarily

Clevedon main product lines have usually been non-threaded, but it soon became apparent through Clevtec that there was a market that Clevtec were unable to service due to our lack of expertise and equipment to manufacture socialist threaded components

In 2012 Clevedon purchased Blakeacre Ltd. Blakeacre had developed a range of technically competent threaded products including:-

Given their location in Great Barr, Birmingham, they were a perfect fit to enable Clevedon to now offer a full range of fasteners. Blackacre's product range is now sold under the Clevtec Brand.

In 2015 Clevedon became involved in a project run by Aston University, called Servitisation. This was based on the experience of MAN trucks who (under a UK MD) effectively stopped selling trucks in some of its markets and started selling a service, i.e. for a monthly fee, the truck, servicing, tyres were all looked after, but also lots of by-products came as standard, for instance, drivers performance was monitored in order to drive down fuel costs. This process has been taken up by many large scales manufactures including Rolls Royce Aero-Engines

Clevedon has always given outstanding customer service; however, a discernible trend became obvious as more companies moved their manufacturing offshore. When new products were needed or new applications, Clevedon would be contacted, provide the necessary information to give a solution only to find that information, given freely to customers as a service, resulted in drawing and ideas, when they moved into volume manufacture, being sent abroad to be made, with no benefit to Clevedon.

The other worrying trend was that Young Designers brought up on computers and IPad and using the latest iterations of Computer Aided Design software which now combine the traditional Drafting Facilities with structural, flow and performance, Finite Element Analysis. In theory, products can be taken from concept to proposed solution, rendering, testing and performance simulation through to proposed manufacturing route. All of this within the software environment, reducing time, the need for expensive physical testing, resulting in a fully formed solution that meets the design concept envelope.

The problem is that the resulting design is then stopped from proceeding when it meets the real world and the purchasing department give them the bad news, that the new shiny design is far too expensive

The lack of understanding of basic engineering processes and techniques and their associated costs is frankly, shocking

As a result of these combined trends, Clevedon through Clevtec now offers a “design Support Agreement” to customers where we take design performance envelope and subject it to basic engineering assessment within a defined cost point. This was introduced in 2017

On the 4th of January 2015, Steve Hardeman (MD) and Charles Hopkins (FD) bought out the major shareholder in Clevedon Fasteners Ltd, Langham industries.

In 2016 to provide improved customer service and to streamline Clevedon’s processes, all storage and despatch was moved into a purpose-built facility in Wednesbury which include a finished product optical sorting operation

Clevedon Fasteners Ltd have just finished 2018, which will result in a further improvement in profitability for the year. The next 80 years beckons and if it is anything like the first 80, it certainly won’t be dull.